These grain-free fried green tomatoes with cajun lime aioli are a delicious spin on the classic recipe! Tangy green tomatoes covered in a crispy, crunchy grain-free batter served with a creamy, spicy aioli. It’s a taste explosion, perfect for using up the last of your summer harvest.

Ahhh, summer is drawing to a close and Fall is just around the corner. YAY! Fall is my favorite time of year. For those of us who are growing tomatoes, we may have a lot of green ones that won’t fully ripen before the cool weather hits. So, what’s a gal to do?

My tomato plants did not do well this year. As a matter of fact, every plant I tried to grow didn’t do well except for my beautiful rock roses (my all-time favorite garden flower!). I ended up with some green tomatoes that were simply not going to ripen before my plants gave up the ghost so I decided to make fried green tomatoes out of them.

Fried green tomatoes are an iconic “Southern” dish. Funnily enough, I didn’t like them until I was an adult. I thought they were gross. Not sure why considering that I now think they are an amazingly delectable treat!

I grew up thinking of fried green tomatoes as a purely Southern dish. They were as Southern to me as fried okra, but as I was doing a brief dive into the history of this dish, I found that some folks don’t believe that it originated in the South and that a movie is actually what made it “Southern”.

Many of you probably had your first interaction with fried green tomatoes via a movie that came out in the early 90s by the same name. This movie, Fried Green Tomatoes, featured  Mary Louise Parker, Mary Stuart Masterson, Kathy Bates, and Jessica Tandy. It was a feel-good movie all about deep friendships, love, loss, and support. It was also set in the deep South — 1920s in Alabama.

I remember watching that movie a few times as a child. I honestly can’t remember much about it, other than it made me cry. LOL! Maybe I should try to track it down and watch it again.

Some Say Southern, Some Say Not

In the debate over where this dish originated, some historians say that it is actually a Jewish dish that was created in the Northeast. Supposedly, it wasn’t until that movie came out that it really took off as being a southern thing. Via Smithsonian Magazine:

“…fried green tomatoes may have been as unusual in the South before 1991 as they were everywhere else. In fact, according to Robert F. Moss, a food historian and writer in South Carolina, “they entered the American culinary scene in the Northeast and Midwest, perhaps with a link to Jewish immigrants, and from there moved onto the menu of the home-economics school of cooking teachers who flourished in the United States in the early-to-mid 20th century.”

“Though it may seem like a solely Southern thing, the origins of the fried green tomato aren’t derived from the South. That’s right, they just may have derived from a land far, far away: the Northeast.”

Robert F. Moss is the author of the out-of-print book,  The Fried Green Tomato Swindle and Other Southern Culinary Adventures. He says, via Bon Appetit:

“…fried green tomatoes first appear in 19th century Northeastern and Midwestern cookbooks such as the 1877 Buckeye Cookbook and the 1873 Presbyterian Cookbook, which was put out by the First Presbyterian Church of Dayton, OH. Recipes can also be found in Jewish cookbooks from the early 20th century…”

My sister, however, was born and raised (she’s quite a bit older than me) in the South and grew up eating them all her life. She said she was definitely eating them prior to 1991 so I guess the jury is still out…

What do you say? Southern? Or not? I’ve love to hear from you in the comments below!

Despite the confusing history, one fact remains: fried green tomatoes taste good. And as an adult, I have no idea why I didn’t like them as a child. Especially when they are dipped in my Cajun lime aioli? Mmmm, that’s GOOD!

Traditionally, fried green tomatoes are made with a combo of wheat flour and cornmeal, both of which are things I can’t eat. Some are battered and some are breaded. It kind of depends on who’s making them. This time around I wanted to do grain-free fried green tomatoes using a batter, so that’s what I created. Truly, if you want to skip the batter part, you can just dust some flour, salt, and pepper on your tomato slices and fry away.

Speaking of flour, you are welcome to substitute in any flour you like for this grain-free friend green tomatoes recipe. Honestly, it’s so forgiving that you don’t need to worry about making them perfectly. Aren’t those types of recipes the best?! If the grain-free batter is too thick then just add in a little more liquid. Want more spice? Feel free to adjust the spices to suit your taste buds.

The tomatoes I used for this grain-free friend green tomatoes recipe were all small, about the size of a golf ball. If you have a lot of larger tomatoes, you might try doubling the recipe. They do keep really well in the fridge and they reheat perfectly. So if you have extras you can save them for another day.

Ready for the recipe? Let’s go ahead and dive in! 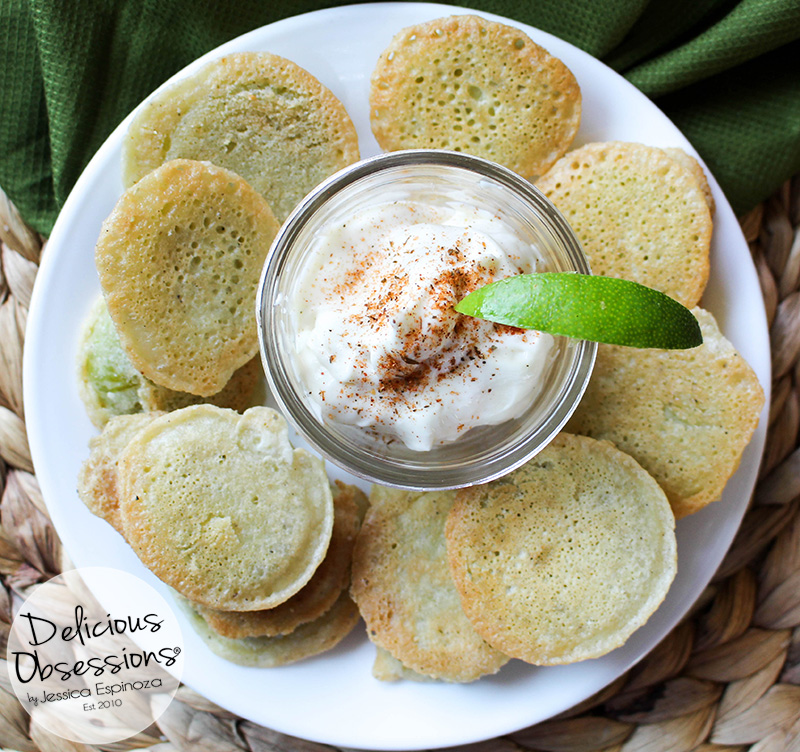 This website provides approximate nutrition information for convenience and as a courtesy only. Nutrition data is gathered from Nutritionix. Nutrition information can vary for a recipe based on many factors. We strive to keep the information as accurate as possible, but make no warranties regarding its accuracy. We encourage readers to make their own calculations based on the actual ingredients used in your recipe, using your preferred nutrition calculator.