Who doesn’t love watermelon? I know I love it and it’s one of my favorite summertime treats. I don’t eat a lot of it, since I do try to keep my overall sugar intake on the lower side, but it is nice to indulge at the height of the season and soothe that craving from time to time.

Today, Dr. Mercola teaches you 6 surprising things you may not have known about watermelon. I had no idea this bright red fruit packed such awesome health benefits!

Oh, and make sure you check out some DELICIOUS recipe ideas at the bottom of this post!

6 Things You Didn’t Know About Watermelon

In the US, July is National Watermelon Month, so named not only because a cool, refreshing slice of watermelon represents the epitome of summer, but also because watermelon harvests peak this month.

Watermelon is now the most-consumed melon in the US (followed by cantaloupe and honeydew). This cousin to cucumbers, pumpkins, and squash is thought to have originated in Egypt close to 5,000 years ago, where it is depicted in hieroglyphics.

Today, upwards of 300 watermelon varieties are grown in the US and Mexico (although only about 50 are popular). You may think you know everything there is to know about this summertime fruit, but allow me to surprise you… watermelon is more than just delicious… it’s a super-healthy addition to your diet (in moderation, of course).

You just need to be careful when eating any melon, including watermelon to follow the advice of Wayne Pickering in my interview. Eat melon alone or leave it alone because it will make your stomach groan. So ideally, no food 30 minutes before or after eating melons.

Lycopene is a powerful carotenoid antioxidant that gives fruits and vegetables a pink or red color. It’s most often associated with tomatoes, but watermelon is actually a more concentrated source.

Compared to a large fresh tomato, one cup of watermelon has 1.5 times the lycopene (6 milligrams (mg) in watermelon compared to 4 mg in a tomato).More on why lycopene is so important shortly…

If you have a juicer, try juicing about one-third of a fresh watermelon and drinking its juice prior to your next workout. This contains a little over one gram of l-citrulline, an amino acid that seems to protect against muscle pain.

One study found that men who drank natural unpasteurized watermelon juice prior to their workouts had reduced muscle soreness 24 hours later compared to those who drank a placebo.

You do need to be careful with drinking watermelon juice, though, as it contains a significant amount of fructose. It may be better to eat the entire fruit, or opt for these other tips to prevent muscle soreness.

3. Watermelon Is a Fruit and a Vegetable

Remember how watermelon is related to cucumbers, pumpkin, and squash? That’s because it’s part vegetable and part fruit (it’s a sweet, seed-producing plant, after all). The other clue that watermelon is both fruit and vegetable? The rind is entirely edible…

4. You Can Eat Watermelon Rind and Seeds

Most people throw away the watermelon rind, but try putting it in a blender with some lime for a healthy, refreshing treat. Not only does the rind contain plenty of health-promoting and blood-building chlorophyll, but the rind actually contains more of the amino acid citrulline than the pink flesh.

Citrulline is converted to arginine in your kidneys, and not only is this amino acid important for heart health and maintaining your immune system, but it has been researched to have potential therapeutic value in over 100 health conditions.

While many people prefer seedless watermelon varieties, black watermelon seeds are edible and actually quite healthy. They contain iron, zinc, protein, and fiber. (In case you were wondering, seedless watermelons aren’t genetically modified, as they’re the result of hybridization.)

This might not be surprising, but it’s still a fun fact; watermelon is more than 91 percent water. This means that eating watermelon with you on a hot summer day is a tasty way to help you stay hydrated and avoid dehydration (it’s not a substitute for drinking plenty of fresh water, however).

6. Some Watermelon Are Yellow

The Yellow Crimson watermelon has yellow flesh with a sweeter, honey flavor than the more popular pink-fleshed Crimson Sweet. It’s likely that yellow watermelon offers its own unique set of nutritional benefits, but most research to date has focused on the pink-fleshed varieties.

Watermelon is an excellent source of lycopene, with upwards of 6,500 micrograms (6.5 mg) in less than half a cup (the red-fleshed varieties will contain significantly more lycopene than yellow-fleshed watermelon).

Also noteworthy, the lycopene in watermelon appears to be quite stable, with little deterioration occurring even after it’s been cut and stored in the refrigerator for more than two days. In one study, it took about seven days of storage for the lycopene to deteriorate, and then it was only by about 6 percent to 11 percent.

So what makes lycopene so important? Lycopene’s antioxidant activity has long been suggested to be more powerful than that of other carotenoids, such as beta-carotene. In one study, after controlling for other stroke risk factors, such as older age and diabetes, they found that men with the highest blood levels of lycopene were 55 percent less likely to have a stroke than those with the lowest.

A 2014 meta-analysis also revealed that lycopene decreased stroke risk (including stroke occurrence or mortality) by more than 19 percent. In addition to lowering your risk of stroke, lycopene has been shown to have potential anti-cancer activity, likely due to its potent antioxidant properties.

A 2014 meta-analysis of 10 studies also showed that dietary lycopene may protect against the risk of ovarian cancer among postmenopausal women. There is also some evidence from animal studies that lycopene may help with cancer treatment as well.

New research also highlights the role of watermelon nutrients on heart attack prevention, via a significant reduction in blood pressure. Obese study participants who received citrulline and arginine supplements derived from watermelon extract had significant improvements in blood pressure and cardiac stress, both while at rest and undergoing a stressful cold-water test. According to the researchers:

Remember, in your body the citrulline in watermelon is converted into L-arginine, which is a precursor to nitric oxide. Adequate nitric oxide is required to enable you blood vessels to stay relaxed and open for blood flow, which is one reason why it may help lower blood pressure.

L-arginine may also help with erectile dysfunction by helping to relax your blood vessels, including those supplying blood to your penis – and that’s why watermelon is sometimes referred to as “Nature’s Viagra.” In fact, citrulline supplementation has been found to improve erection hardness in men with mild erectile dysfunction.

What else is watermelon good for? It’s rich in anti-inflammatory substances. For instance, watermelon contains the anti-inflammatory antioxidant lycopene as well as cucurbitacin E, or tripterpenoid, which reduces the activity of the pain and inflammation-causing enzyme cyclooxygenase – the same enzyme blocked by COX-2 inhibitors, which include most NSAIDs like aspirin and ibuprofen. While being very low in calories (about 46 calories in a cup), watermelon also contains an impressive variety of other important nutrients in which many Americans are lacking, including:

How to Pick the Perfect Watermelon

Cutting into a watermelon and finding out it lacks flavor is disappointing. There’s a trick you can use to pick out a ripe watermelon, either from your farmer’s market or your own melon patch. Look for a pale, buttery-yellow spot (not white or green) on the bottom. This is where the watermelon sits on the ground ripening, and it’s one of the best indicators of ripeness you can use (even commercial watermelon pickers use this as a gauge). Other tricks for picking a ripe watermelon include:

Store your watermelon in a cool area (50-60 degrees F) until it’s cut. Cut watermelon should be refrigerated (and be sure to wipe off your watermelon with a damp cloth prior to cutting it). Remember, try the rind blended with some lime juice rather than simply tossing it in the trash (choose an organic watermelon especially if you’ll be eating the rind). Finally, watermelon should be enjoyed in moderation due to its fructose content. One-sixteenth of a medium watermelon contains 11.3 grams of fructose (I recommend keeping your total fructose intake below 25 grams of fructose per day if you’re in good health, and below 15 grams a day if you’re overweight or have high blood pressure or diabetes). 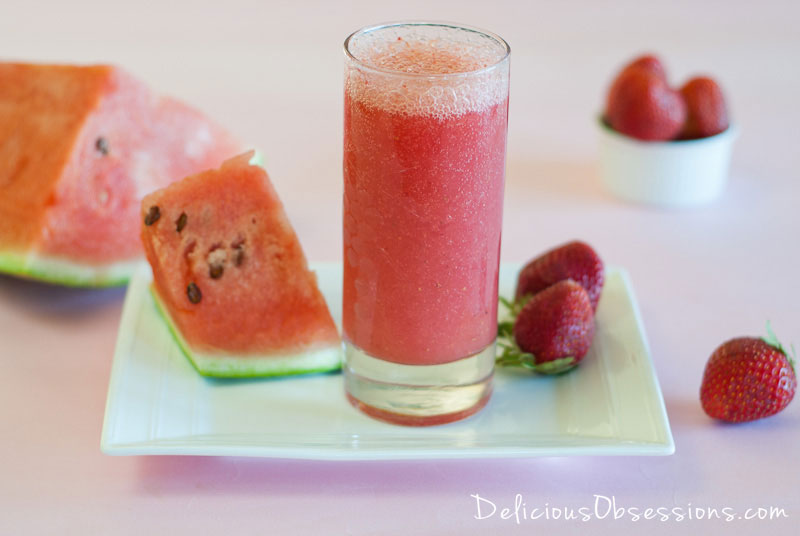 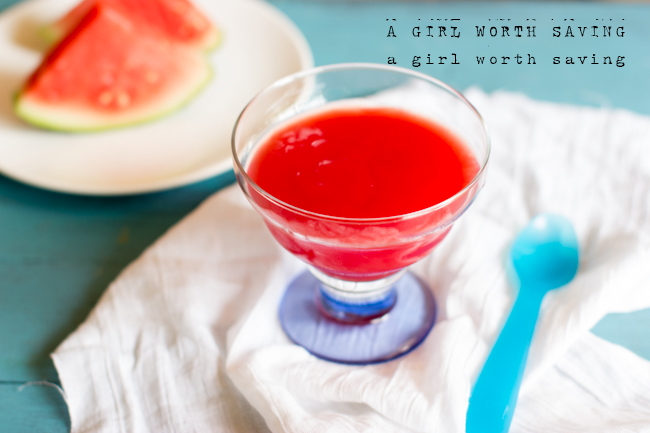 Watermelon Jello from A Girl Worth Saving 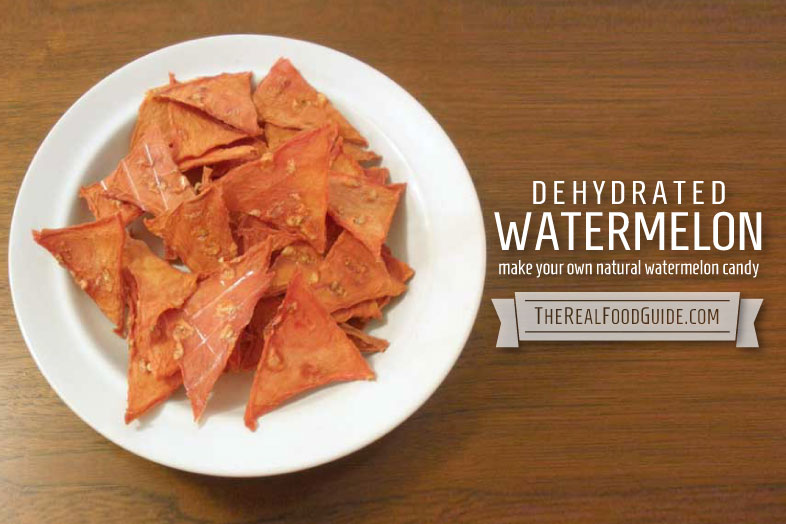 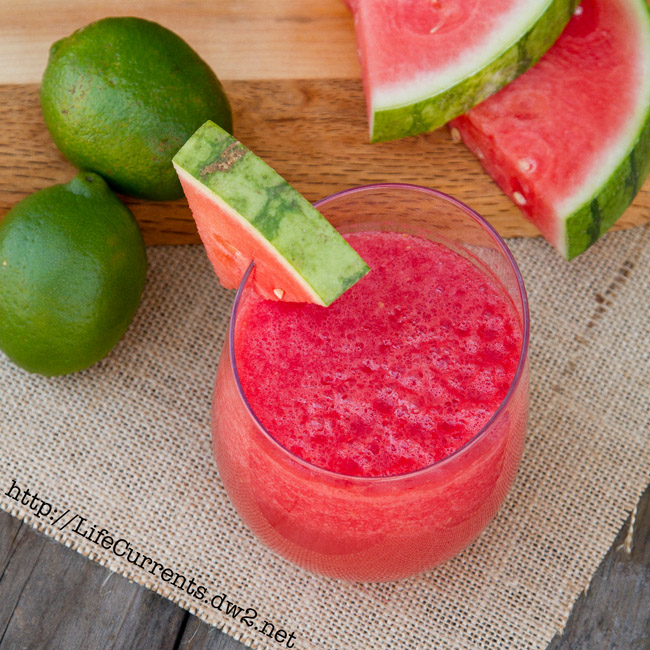 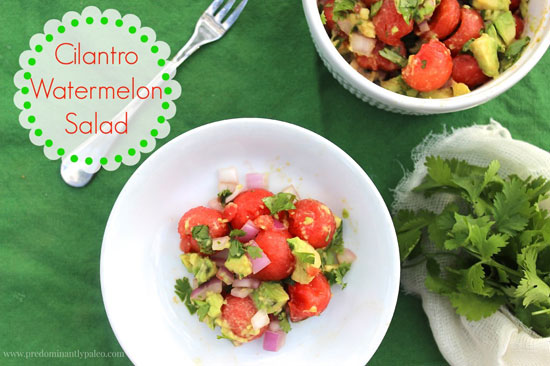 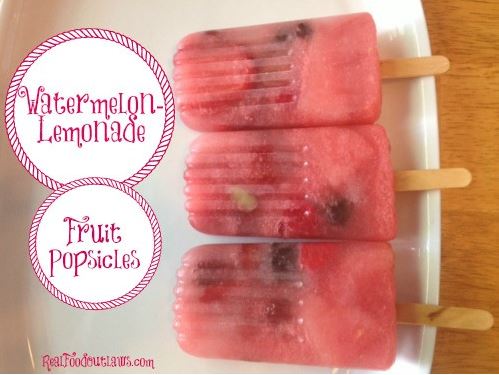 And, if that’s not enough, here are a whole heap more of watermelon recipes to keep your summer fresh a delicious!