I love cinnamon. Of all the spices, it’s probably my favorite. I’ve always been a huge fan, but when I ground my first Vietnamese cinnamon stick and tasted the spicy, sweet powder, I was lifted to a whole different realm of cinnamon happiness. I had no idea that cinnamon could taste this good, and this is coming from someone who already loved this spice. I knew that I had to find ways to eat it in everything I could. And, when I couldn’t find a food appropriate to eat it in, then I’d just crunch on a stick! 🙂 Seriously. I do. The flavor reminds me of a red hot candy in that it’s sweet and fiery at the same time. Much, much stronger than your traditional cinnamon. There have been a few sticks that I’ve tried that have actually made my eyes water.

DISCLAIMER: The content shared on this site is for informational and educational purposes only. Statements/products discussed have not been evaluated by the Food and Drug Administration (FDA) and are not intended to diagnose, cure, treat, or prevent any disease or illness. Please consult your own certified health care practitioner before making changes to your current diet or before beginning any herbal or vitamin supplement regimen or exercise program.

So, what makes cinnamon, specifically Saigon, aka. Vietnamese cinnamon, so special? Well, the first thing is the fact that Saigon cinnamon has 1-5% essential oil in content and 25% cinnamaldehyde in essential oil, which is the highest of all the cinnamon varieties (supposedly, the oil levels are so high that it will actually spark if you light it on fire … I did not, however, test this theory). Because of this high oil content, it is more expensive than the traditional cinnamon you find in the store. Chefs hold Saigon cinnamon as the best in the world. Once you taste it, you’ll understand why. If you purchase some of this cinnamon, and I HIGHLY encourage you to do so, you will never, ever go back to plain old, pre-ground cinnamon. This is the only cinnamon I will ever use and I actually buy the sticks in bulk, so that I never run out! Don’t buy the pre-ground stuff. Buy the whole cinnamon sticks and use a coffee grinder to whiz it up whenever you need it. A micro-plane also works well if you just need a touch of the spice for a recipe, but I often will grind up several whole sticks at a time. 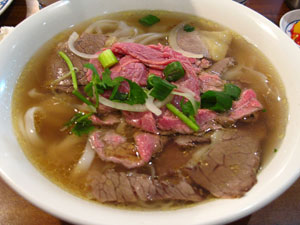 Even though it is called Saigon cinnamon, it is not produced in the southern Saigon area. Most production takes place in central and northern Vietnam and is harvested for both for exporting and domestic use. When the Vietnam War took place, it interfered with the production of this spice, and it was unavailable in the U.S. for 20 years. Since the start of the 21st century, Vietnam has started exporting the spice again. It remains a staple ingredient in Vietnamese cuisine and is used in my favorite Vietnamese dish, a noodle soup called phở. If you want a great recipe for homemade Phở, check out my friend Debbie’s recipe from Easy Natural Food. Mmmm … this is making me hungry! 🙂

Did you know that cinnamon is mentioned in Chinese writings as far back as 2800 B.C.? Or, did you know that in Ancient Egypt, cinnamon was a vital part of the embalming process? How about the fact that cinnamon was only affordable by the affluent in the Middle Ages, and a person’s social rank could be determined by the number of spices they owned? For more interesting facts and trivia, check out the Eat This! website.

So, now that you know a little about this specific type of cinnamon, I want to tell you why cinnamon rocks. It is awesome, primarily because it tastes good and is good for you, but here are some specific reasons:

These are just a few of the ways that cinnamon rocks! As usual, if you are interested in adding cinnamon to your diet, please consult your primary care physician before doing so. Cinnamon does not often cause any allergic reactions or negative health effects, however, each one of us is different, so we could all have different reactions. According to the Eat This! site, there have been some known side effects of consuming large amounts of cinnamon.

Supporting a The Adrenals, Thyroid, and Whole Body Through Herbs

When it comes to supporting overall wellness, herbs are a great tool to have in your toolkit, especially those who may be dealing with chronic illness of some type. Since 2009, when I started this site, I have met thousands upon thousands of people through my work and by far, the #1 health complaints are:

Because of this, I wanted to add in a section into this post about the benefit of using herbs with chronic illness.

If you are dealing with any type of chronic illness, I’m sorry to break it to you, but caffeine may not be your best friend. 🙁 While you can find lots of info online in both the pro- and the anti-coffee camps, the fact of the matter comes down to the fact that are a lot of people dealing with chronic illness, especially thyroid and adrenal problems, that simply cannot tolerate coffee and caffeine.

While those with sluggish adrenal glands tend to feel run down and in need of a regular pick-me-up (like coffee and other caffeinated beverages), in the long run, caffeine can do more harm than good while you are healing. I go into the “whys” around caffeine and your adrenals in this detailed post here. In addition to the caffeine, there are other constituents, molds, and mycotoxins that can show up in coffee that some people find they react to and can further exacerbate the toxic load on the body.

When I was diagnosed with autoimmune disease and adrenal fatigue, one of the first things that had to go was coffee. In addition to dealing with these issues, we suspected that I was having some detox pathway sluggishness so we wanted to also focus on supporting the liver and lymph systems. Most people who are dealing with chronic illness are also going to have issues with detoxification of the body, which is why herbs can play such an important role.

To be honest, I never drank coffee because of the caffeine. I drank coffee for the taste and aroma, as well as the emotional experience I felt to my morning cup of joe. For me, it was a ritual that I looked forward to every day (and sometimes multiple times a day). Whether I was brewing it at home or going to my local coffee shops, the experience was one that I clung to tightly.

But, when I was faced with new health struggles, I knew I had to do whatever I could to support my body and give it the tools it needed to heal. Giving up coffee and caffeine was one step in this direction.

I turned to the coffee substitutes on the market in a desperate attempt to recreate the ritual I had grown so fond of, but nothing ever tasted the way I wanted it to. Nothing ever gave me that same experience that my cup of “real” coffee did. I knew there had to be something better, but I simply could not find it on my health food store’s shelves.

Necessity is the mother of invention so that is why I created my own coffee substitutes. They were made with organic, sustainably harvested herbs with zero grains, zero gluten, and zero caffeine. Just herbs.

Herbs that not only tasted delicious but supported my body’s function, like liver detox, bile production, digestion, etc. All of the herbs used in my “coffee” blends have been used for thousands of years to support the body’s normal functions and help everything work a little better — something we all need in today’s toxic world! (psst, dandelion is one of the herbs!)

When it came to creating these blends, if I could get something to not only tasted amazing (and helped me recreate my dearly loved ritual), but also did amazingly supportive things for my body, then it’s a no brainer!

I sold these pre-made blends on Etsy for awhile and the demand was more than I could keep up with. People literally LOVED these blends and were stunned at how much like coffee they actually tasted. Customers who had been dealing with a variety of chronic illnesses had given up coffee to heal their bodies, but like me were deeply missing their morning cup of joe ritual.

After careful consideration and work with some highly experienced advisors, I decided to stop selling the pre-made blends and instead share my proprietary recipes in the form of an eBook. That way I could arm people with the knowledge and recipes they needed to make their own caffeine-free, gluten-free, grain-free blends in the comfort of their own home.

That is why I created the best-selling DIY Herbal Coffees eBook: A Complete Guide To Making Delicious Herbal Coffees to Support Healing & Stress Relief.

Now in its second edition, this ebook features:

This book truly is a comprehensive guide to supporting your health, reducing your stress, and bringing a little something special back into your healing journey. You can learn more and download your own copy of this revolutionary wellness guide here, or simply click on the image below. 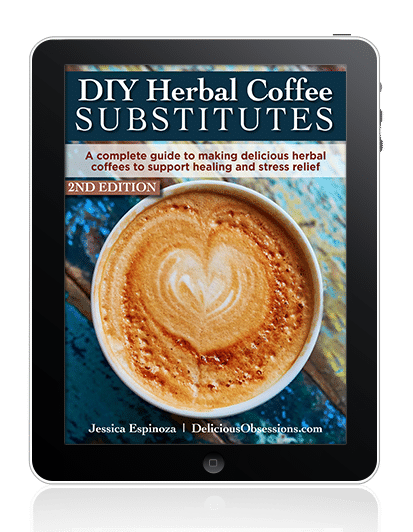 Have food sensitivities or allergies and missing out on delicious treats? Don't miss out any longer with my FREE Deliciously Decadent Desserts eBook! Featuring never before published recipes that are gluten, grain, dairy, and refined sugar free! Now you can make allergy-friendly treats the whole family will love!